I have never seen this species but I think that it is more likely in the far southern part of the state where Ilona Loser was able to see this species and take the wonderful photos here.

The species name refers to the eight light colored spots, 4 on each side, of the dark abdomen. The legs are nearly all yellow except for the apices of the hind tibia which is dark. There are few hairs all of which are white or yellowish. At least in photos, the eyes are greenish and distinctive in the correct lighting. The tip of the males abdomen and genitalia are reddish.

This species is in the same subfamily as Diogmites sp. and could be mistaken for species in this genus. Baker and Fischer (1975) point out that this genus looks very much like Dioctera and they have often found this species misidentified as Dioctera. I think that this species could easily be misidentified in the field with Cyrtopogon with the light markings on the abdomen.

Baker and Fischer only list five records of this species from Michigan, all from the southern part of that state. Although this species is widespread in the eastern U.S. it appears that Wisconsin is at the northern edge of its range. 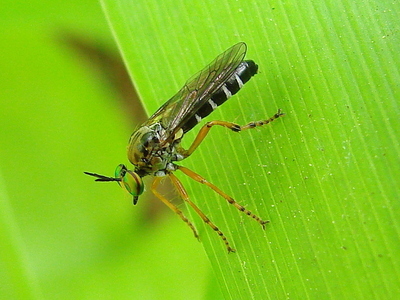 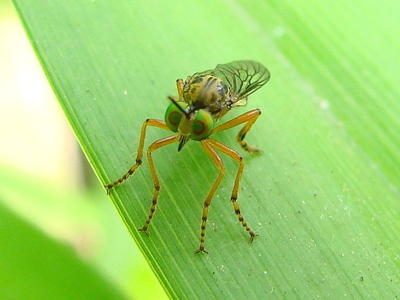