This species possibly can only be told from L. sericea by examining the genitalia. The photo here of a female was taken on the same day and location as a male that I examined. It may be this species, but it could just as well be a photo of L. sericea since it was common in central Wisconsin in very similar habitats. In fact, now that I have identified specimens I took on that day, I did have a female of each species! All together I collected 8 individuals of this species at five sites in Wood, Waushara, and Marquette Counties. Five females and three males.

Abdomen with yellowish, golden hairs and the same color as the those on the thorax. Lighter hairs below the face (beard) and darker hairs over the eyes.

L. sericea is essentially a twin of this species and possibly can only be told from this species from the genitalia, which is distinctive in both the males and females. 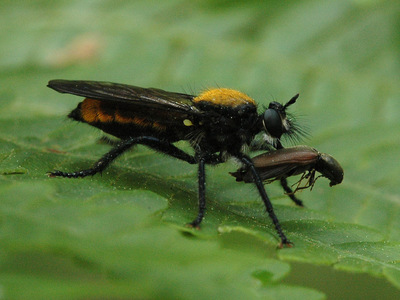