I didn’t recognize that I had this species until I started looking at my Laphria canis complex specimens. I had originally thought I had maybe a different species from the others, and it was not until that I started looking at my specimens that I realized that I had an entirely different genus. The photo that I took of this species is not very good, but it is the only one I took and I wanted to show how much in the field it did appear like the L. canis complex group.

The side of frons is more or less parallel with the head wider than high, and the face with hair on only the lower one-third of face. The margin of the scutellum has moderately long hair, as long as scutellum while the disc of scutellum has more appressed hair. The hairs of the palpi are yellowish as are the majority of hairs on the body and legs. The female’s mystax is a very light yellow compared to the other yellow hairs. The base of the tibias is a reddish brown and the legs have weak bristles of nearly the same color and contrast with the yellow hairs. The entire black, somewhat shiny abdomen above has short yellowish appressed hairs on the upper surface. Body length 11.5-13 mm.

None in Wisconsin, but notice that it was easy for me to initially get this confused with the L. canis complex species, however the reddish base at the base of the tibias should eliminate those species.

The only individual that I have seen in Wisconsin was this female on June 24, 2007, but Baker and Fischer (1975) noted that they saw several specimens of this species from Dane County in Wisconsin, however they listed no other information about it. 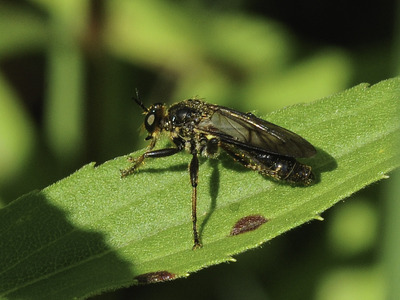 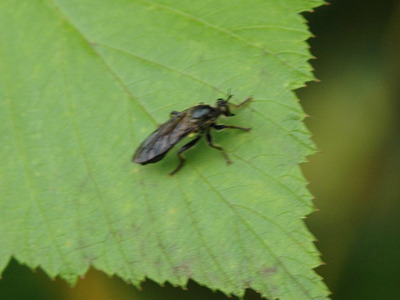 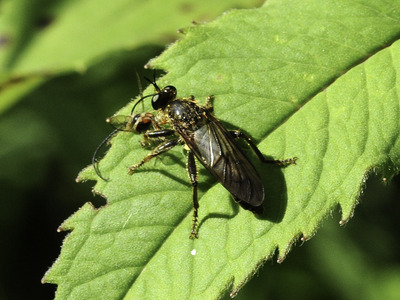