Ken Tennessen first spotted these insects at the edge of an open area adjacent to the woods on an island in the Wisconsin River. We saw three individuals at this location but I was unable to locate other individuals on this day or on a return visit later in the week. There are three possible species of Holcocephala in Wisconsin and they are all very similar in general appearance and behavior. They all perched at the tip ends of vegetation and although they were not hard to approach they were hard to photograph because of their small size, about 9 mm, and with the wind it was almost impossible to get a photo. 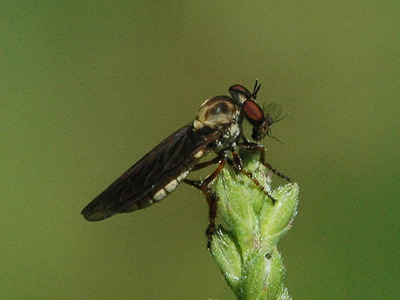